I remember election night in 2008. The most important image to me was Michelle’s mom, Ms Robinson sitting holding the Presidents-Elect’s hand. How powerful was that? Ms Robinson and the President-Elect knew what was coming.  My question is; how did they contain all the emotions that had to be running through their veins? I was shedding tears sitting in my living room.

America needed a special person because the country was in a real crisis. The financial system was crashing around us. The automobile industry was about to go under. Real estate was in a deep dive.  Unemployment was flirting with 8 percent and we had two ongoing wars. It was a dire situation. I can say that America set aside race at this crucial moment in our history and elected the best person.

After inauguration it was immediately clear, President Obama knew what he was doing. It was also clear he was not going to get much help.

He was methodical and, like a good doctor, had a prescription for each ailment facing the country. First he blocked the stock market. Then he screened the auto industry and tackled real estate. He brought our troops home before too many more were gone. Before long, unemployment started to make a positive turn after bottoming at nearly 10 percent.

He did it all with grace even in the face of blatant disrespect. He did it with hard work because obstruction grew tentacles with his every policy. He did it with smarts. He juggled powerful competing interests that each wanted it their way. He did it with dignity and integrity. There were no scandals or ethical violations.

He had ups and downs. He cried and carried the pain with the victims of mass shootings and their families. He tried to bring understanding that race does matter. He did get Osama.  He brought health care to 20 million more Americans. Unemployment is below 5 percent and the stock market has grown over 140 percent since he was inaugurated. That is what I call performance.

Michelle made us proud every day. She was so beautiful, so graceful, so vibrant and so free. She broke the mold on what a First 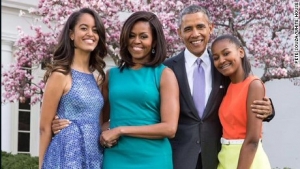 Lady could be. She worked with the troops and encouraged us to eat our fruit. She danced and sang and even wore bangs. She always spoke from the heart and showed that everyone had a part.

These last few weeks finds everyone talking about what President Obama’s legacy will be. What will survive the onslaught of the new President and Congress?

I’m not really worried about his legacy because it’s time to put up or shut up. President Obama set the bar very high and whoever comes behind has to do even better. All those who voted for change didn’t vote based solely on hate or race, although it was kindling to spark the fire. Most voted for new results. Eight years of obstructionism highlighted by not passing an Infrastructure Bill or any other measures to spur better paying jobs; left large sections of America working nowhere near its full potential.  The result is pain.

Pain has a funny way of moving through the body. It may start in your knee; before long it will move to your back because you overcompensate for your knee. Cutting healthcare to 20 million people without a better solution is like moving knee pain to the back. Building a wall like it will be the magic pill that solves all our problems is the equivalent of putting an ace bandage on a compound fracture. It will cover the exposed bone so you don’t see it, but the pain is still there and soon infection will set in.

The one legacy President Obama will leave is that you have to do real work to solve real problems. If not, the pendulum will swing again and those nearly 3 million more votes Hillary received will be in the right congressional districts next time. And next time is in 2 years.

So don’t worry about President Obama’s legacy. His legacy is he worked and performed every day. More importantly, he and Michelle did it with a grace, passion and caring never seen before.

If I could have 100 dreams of what the first African-American President and First Lady of the United States of America should be; I would picture President Obama and First Lady Michelle each time.

We are “SO PROUD” of you President and Mrs. Obama for a job well done.

Thank you so much for being excellent role models and leaders for all of America!